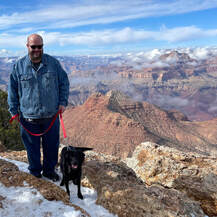 Pastor Luke has been a part of the SonRise Church family since October 2017.  Previously, he had served as the youth pastor at Bitterroot Valley Church in Western Montana and Casper First Church in Wyoming.

At 42 years old, he has been working in youth ministry, both in staff and voluntary roles, for half his life. He just completed nine years as the District NYI President of the Rocky Mountain District Church of the Nazarene, and he continues to serve RMD NYI as the Secretary of the District NYI Council and advisor to the new District President.

Music has been a huge part of his life and ministry as well. His primary musical medium is in the percussive arts (drums and other stuff you bang & hit with sticks, mallets, or your hands), but he primarily facilitates corporate worship with guitar and voice.

In October 2017, Luke completed his Bachelor of Arts Degree in Christian Ministry from Northwest Nazarene University.  He is currently working on his Master of Divinity Degree, also through NNU, with an emphasis on Missional Leadership.

Luke is the son of two parents, brother of four siblings, uncle of three nieces and five nephews (ages 2 thru 23), and will soon have the privilege of officiating his oldest niece's wedding. His household companions are two cats and a dog, and Natasha (his dog) accompanies him whenever possible.